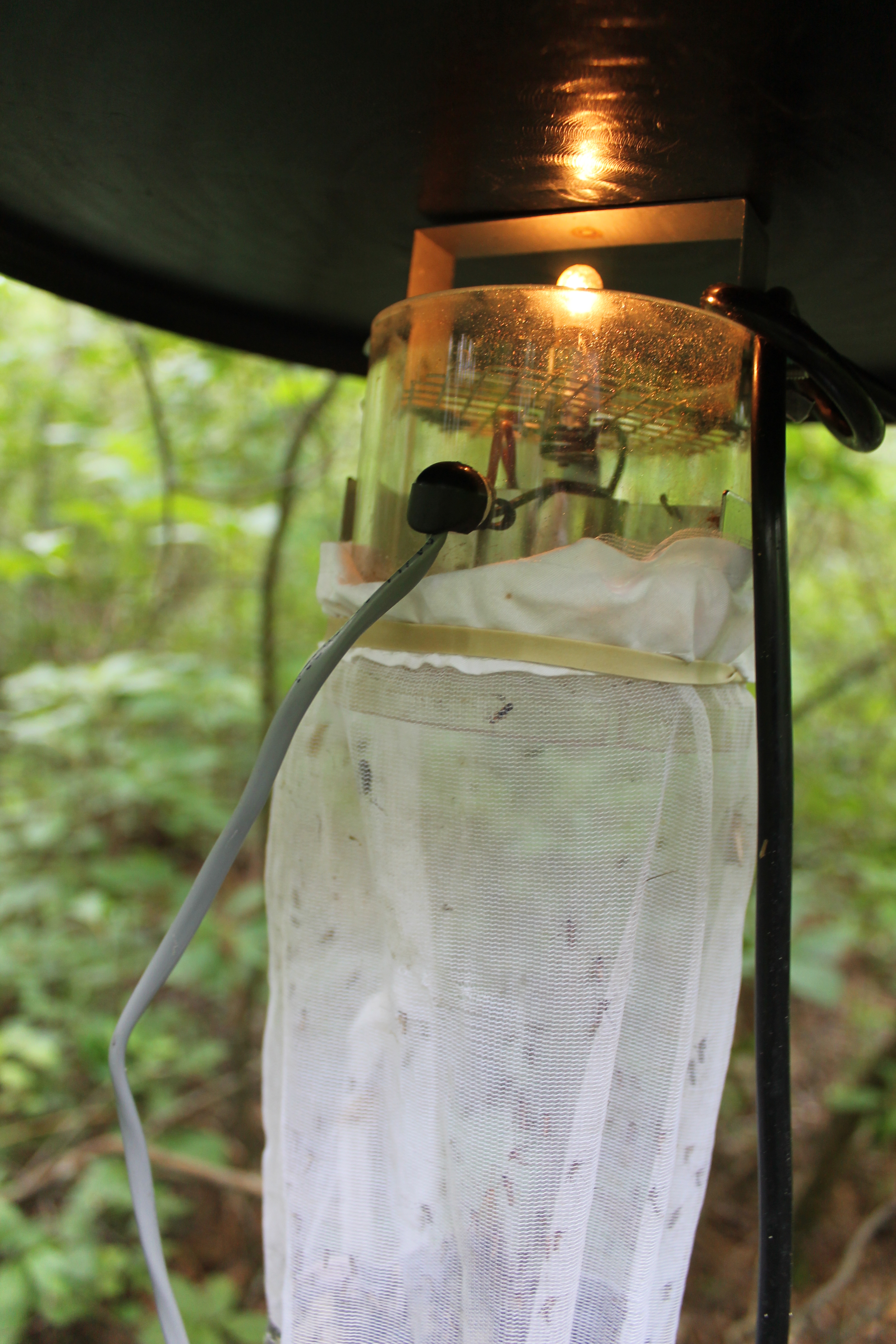 The disease landscape is continually changing.  Human impacts such as climate change, travel and commerce have allowed both mosquitoes and diseases to expand their ranges. In 1999 West Nile Virus was introduced into New York City.  It quickly spread throughout the United States including Massachusetts.  Recently, the disease landscape changed again when Zika and Chikungunya were imported into the Americas.  Neither of these diseases are currently in Massachusetts.

Massachusetts' main mosquito borne diseases are Eastern Equine Encephalitis and West Nile.  The Department of Public Health is the lead state agency for disease surveillance and control.  Mosquito control agencies work closely with DPH and participate in the surveillance program and in the control of disease outbreaks.


The EEE virus disease cycle involves several different species of mosquitoes.  During the summer the amount of EEE virus in the environment increases in a bird-mosquito cycle.  In some years when there is a lot of virus circulating between birds and mosquitoes the virus infects mammals as well.  Humans and other mammals usually get EEE virus in late summer, when it is most common in the mosquitoes. 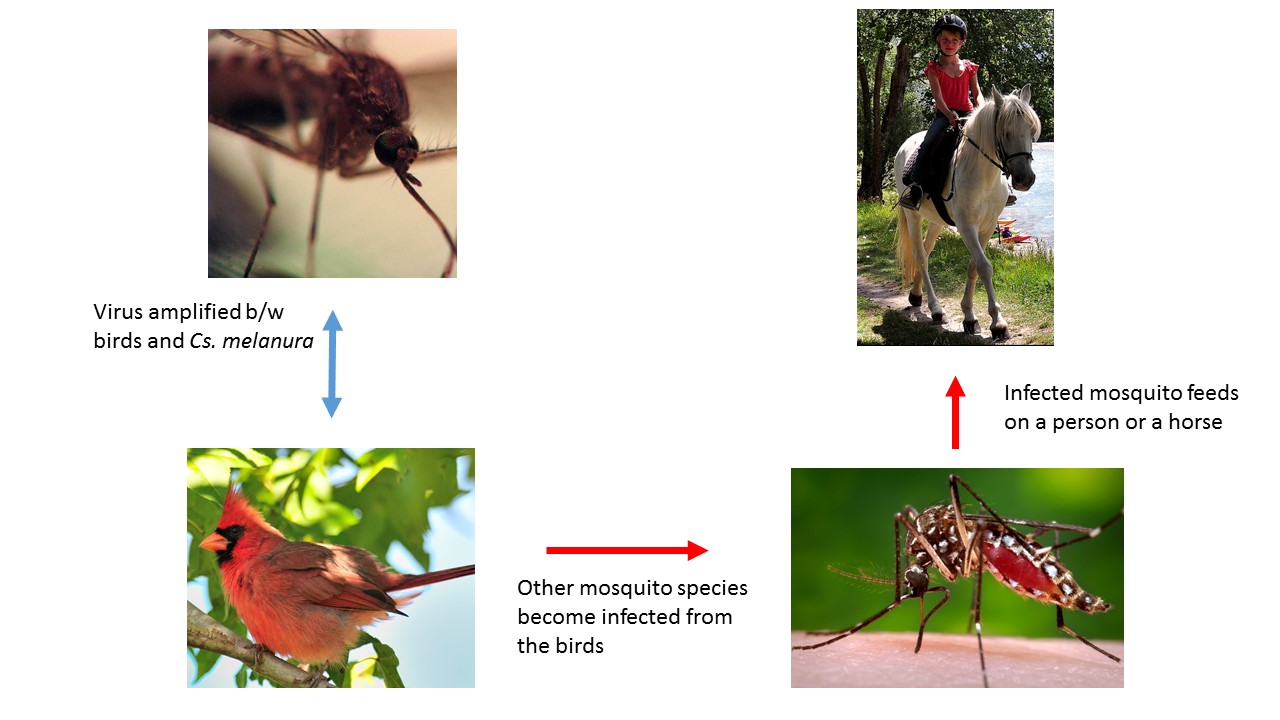 How serious is EEE and who is at greatest risk?

West Nile Virus was first identified in the West Nile district of Uganda in 1937.  In 1999 the virus was introduced into New York City, from there it spread quickly across the continental U.S. Currently, WNV has a world wide range including most of North America, Europe, Africa, Asia and Australia.

In 2000 the virus was found for the first time in Massachusetts.  From 2000-2019 there have been 193 identified human cases of West Nile state wide.  Six of the human cases were in the district.  There have been horses and other livestock have also been infected with WNV in Plymouth County.  The number of infected horses has decreased significantly since the introduction of a vaccine for horses. 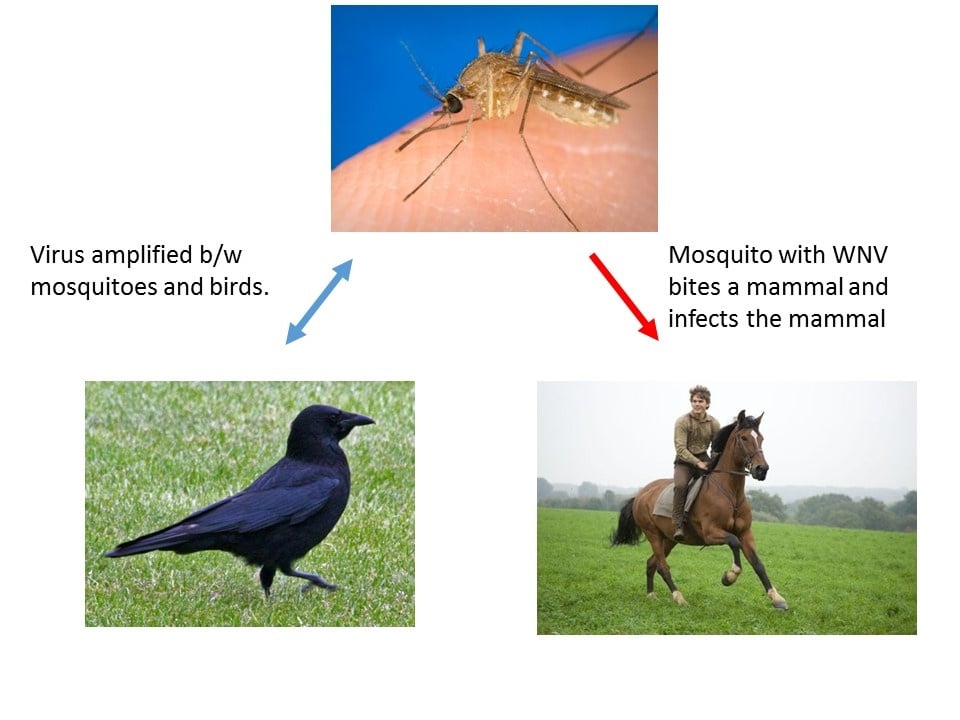 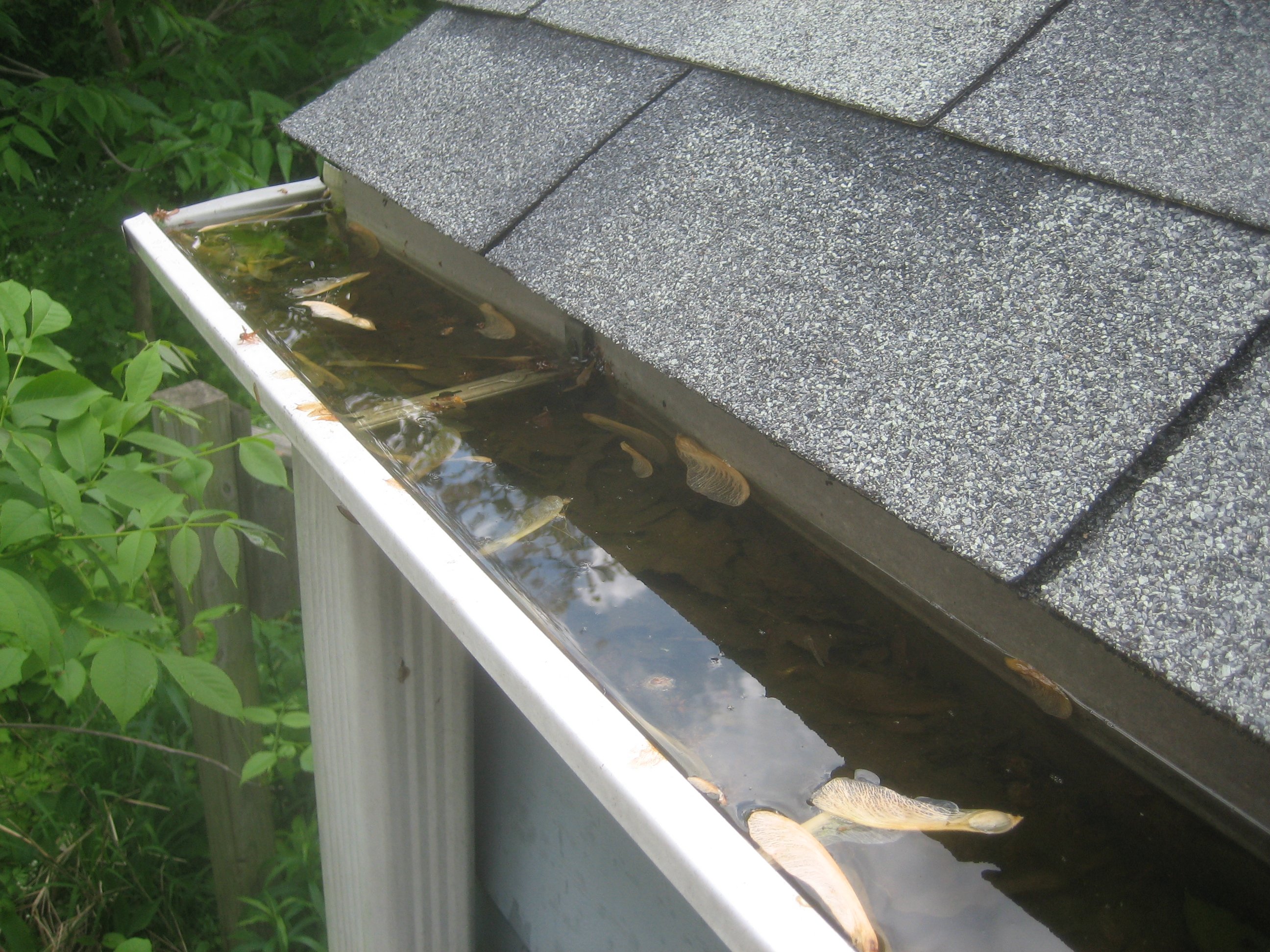 How do I prevent mosquitoes?

How can I prevent mosquito bites? 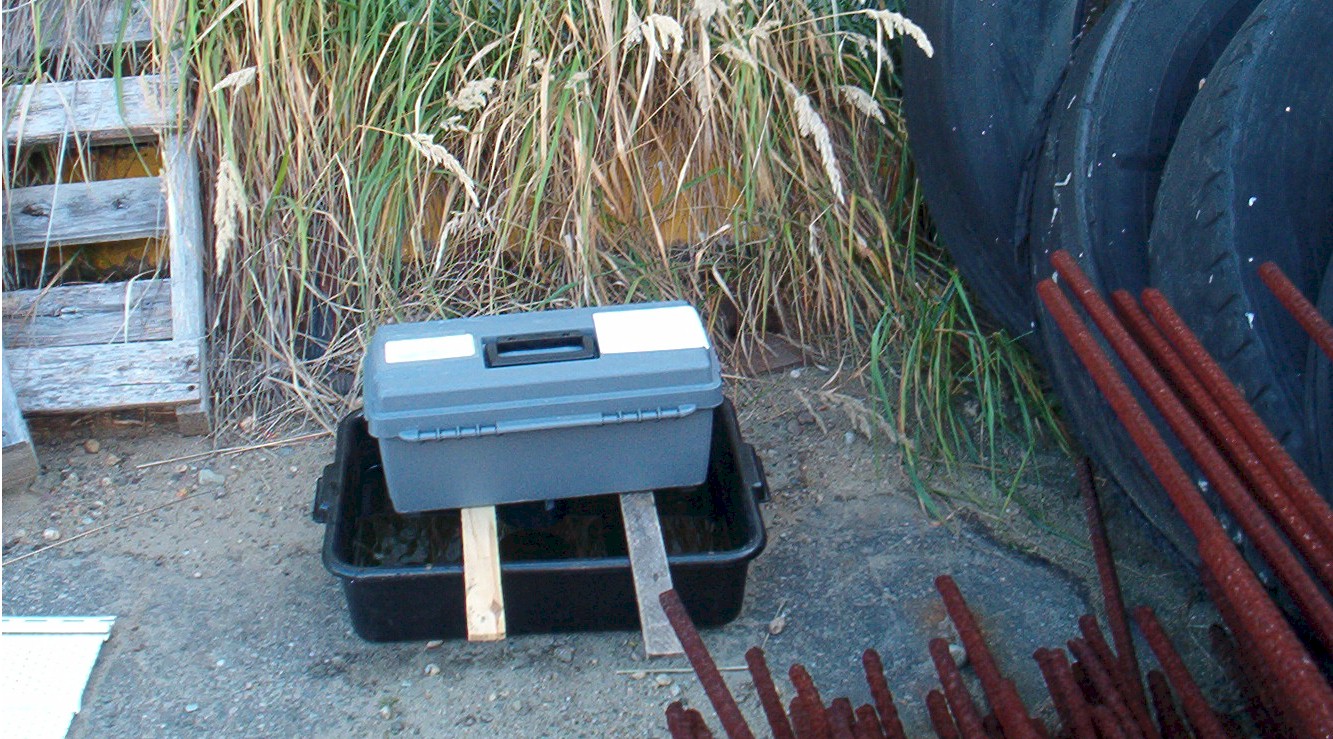 Another important component of our control strategy is to reduce the amount of habitat available for Cx. pipiens.  As a result we prevent mosquito production in catch basins by applying pesticides.  We have also begun a program to collect old tires.

Finally, the public has an important role to play in the control of WNV and we work to educate the public about the issue.  We visit schools and others to discuss WNV.  If you are interested in having us come visit your organization or home, please give us a call at (781)585-5450. 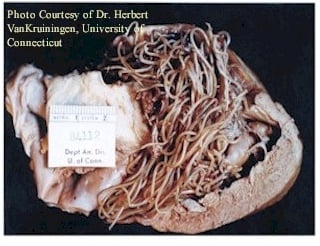 Dog heartworm (Dirofilaria immitis) is a parasitic worm that can be life threatening for dogs and other canines. Mosquitoes play an essential part in the lifecycle of the worm. Dogs and sometimes other animals such as cats, ferrets and raccoons are infected with the worm through the bite of a mosquito carrying the larvae of the worm. While cats are susceptible to the disease they do not appear to be good hosts. Dirofilaria immitis is found throughout much of the United States including Massachusetts. Many mosquito species in Massachusetts can become infected with the worm.

Dirofilaria immitis is dependent on both the canine and the mosquito to fulfill its lifecycle. In an infected dog the adult worms are 9-16 inches in length and live in the dog's heart and lungs. The young worms circulate in the blood stream of the dog. These worms must infect a mosquito in order to complete their lifecycle. Mosquitoes become infected when they blood feed on a sick dog. Once inside the mosquito they live in the body of the insect, where they develop for 2-3 weeks. When they are in their 3rd stage of development they move to the mosquito's mouthparts, where they will be able to infect an animal. When the mosquito blood feeds, the young parasites are deposited on the surface of the skin. They enter the skin through the wound caused by the mosquito bite. The worms burrow into the skin where they remain for 3-4 months. If the worms have infected an unsuitable host such as a human the worms usually die at this point. If the larvae are in a suitable host they will enter the blood stream and locate the heart of the animal. Once they are in the heart they will reach the adult stage after about 5 months. In all the lifecycle of Dirofilaria immitis takes about 9 months to complete. 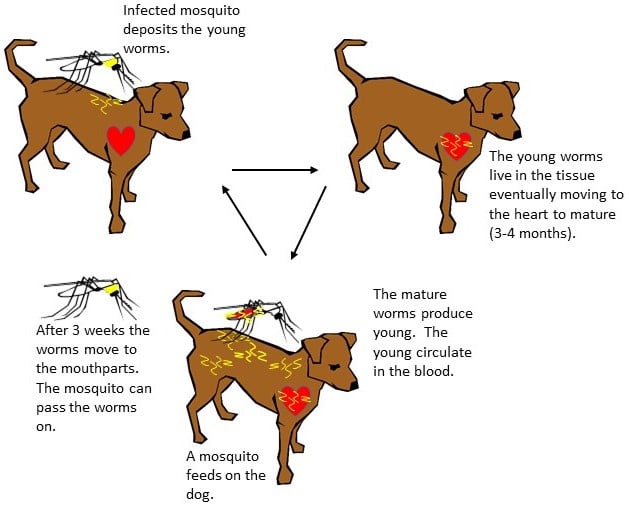 Symptoms are not usually apparent until the adult parasite have damaged the heart and other organs as a result of reduced blood flow.  Some of the symptoms include:

Prevention is the Best Treatment

Curing dog heartworm can be an expensive and risky. The goal of treatment is to remove the adult heartworms, prevent reinfection and minimize complications. If our dog has heartworm your veterinarian should evaluate your pet and decide the best course of action.